Welcome to the latest issue of the GB1900 newsletter.
Winding-up GB1900
We have decided to keep the project running through the Christmas break, to give you time to track down those last few transcriptions, so the last day will now be:
SUNDAY 7TH JANUARY 2018
We will actually close down early on the Monday morning.
As we have said before, we think it is necessary and desirable to fix a clear end date to the main GB1900 activity: it is getting harder and harder to find new names to be transcribed, and there is work to be done to create a "clean" final version, especially where we have three transcriptions all slightly different, which can only start once the main site closes down.
We also want to celebrate the completion of the work, and recognise the volunteers who have made the largest contributions. The next article explains how we are going to do that, and also introduces a new ranking system which identifies who is making the largest contribution to these final stages.
We are paying you Millions [of virtual Doubloons] to complete GB1900
We need to finish up GB1900 and we realise that it is getting harder and harder to find new "pins" to create. We also know that the current leader board no longer provides the right incentive, as we now mainly need confirmations and most of you can only improve your ranking by creating new pins.
We can't change the leader board within GB1900, and want to go on using it to recognise the contributors who have made the greatest long term contribution to the project. However, we are adding a separate system to reward those who do most in these final months:

We can't include this new ranking in the main web site, but we will be including it in these mailings and on the support site. To preserve privacy, we are listing only first names and the first and last letters of surnames, but we think this is enough for you to identify yourself. We are including the overall counts since 1st September, but to work out the Doubloons you need to know which week they were done in: 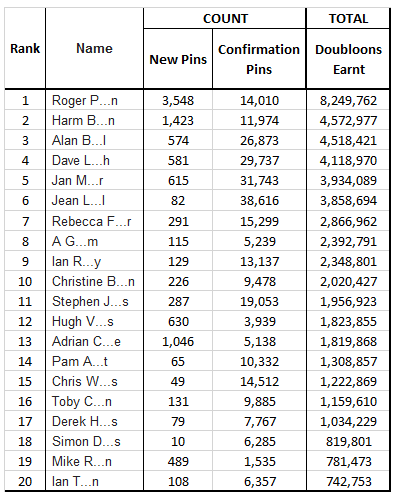 Viewing Results
We have updated the "needs confirming" dot map, both to reflect progress over the last month and to try to exclude more of the pins which DON'T need confirming, because they are mistakes. For example, we are trying to exclude benchmark heights, and also some pins we have been able to identify as having no associated features at all. We hope to do a better job next time of excluding pins which have not been confirmed because they are duplicate transcriptions. Please don't worry too much if some of these "unconfirmed mistakes" are in the system at the end: we expect to do quite a lot more tidying up after the site closes down, and the final gazetteer will include only names which have been confirmed. What will not be possible after that is adding completely new pins.
The new map is here:
http://geo.nls.uk/maps/gb1900/#layer=1
This can obviously guide you to areas where confirming work is needed, but by highlighting the areas where there has been recent activity it can also guide you to where you are most likely to find names which have been completely missed. However, those are going to become steadily harder to find, which is the point of the new ranking system.
We have also added some maps which show certain kinds of feature, and give an idea of the eventual results from the project:
http://geo.nls.uk/maps/gb1900quarry/
http://geo.nls.uk/maps/gb1900gallow/
http://geo.nls.uk/maps/gb1900common/
GB1900 Volunteer Study
We have now received "ethics" approval for this from the University of Portsmouth, and will soon be e-mailing some of you asking if you are willing to talk to us about your experience with the project, in a telephone interview. Participation will be entirely voluntary -- we don't have you phone numbers! -- but our main focus will be on our most active contributors, who have clearly devoted many hours to the project, and we hope they will find talking about it interesting.
One aim is to learn what difference it makes to be working on the particular places shown on the maps rather than, to take the well-known example of the GalaxyZoo "citizen science" project, distant galaxies. If you agree to be interviewed, we will be creating a map of Britain showing the locations of all your transcriptions, which we will send you before the interview so that we can discuss what they mean to you.
We also want to discuss your detailed experience with the GB1900 software, although we need to emphasise that this is not so that we can make immediate improvements. This is to help us plan a completely new system which would provide a more general framework for both extracting information from historical maps and adding your own information on top of them; but once we have planned it we will need to apply for funding to build it.
Although the telephone interviews will be with a small number of contributors, we are also planning an online questionnaire which we ask all contributors to complete, but the design of the questionnaire needs to be guided by what we learn from the interviews so that is a second phase of the study.
With regards,
The GB1900 Project Team